When Natalie* ended up in a wheelchair after contracting a staph infection in her spine following a routine laparoscopy, she and her partner Grant* had to face some hard truths. Although the laparoscopy revealed no medical reason why they couldn’t conceive, the couple were devastated that their dream of a family was proving so elusive.

Helping a child in need

“The continual hope and disappointment of trying to conceive really took it out of me. I had to do something,” says Natalie. “When I recovered from the infection and could walk again, we decided to foster. We had so much love to give and wanted to make a difference to a child’s life.”

The first child placed with Natalie and Grant was a 19-month-old boy who stayed with them for nine months. “He was absolutely gorgeous and it was so hard to part with him. But we understood it was better for him to be with the carer who also adopted his siblings.” One year later, Luke*, who was ten days old at the time, was placed with the couple, initially as a short term but indefinite placement.

When Natalie and Grant took on Luke’s care, they knew there was a family history of autism. But whatever his needs, whatever his prognosis, the couple had no doubt they wanted to adopt Luke as a permanent member of their family.  “We made a commitment to Luke,” says Grant, “We love him as our own and want to give him stability and continuity.”

“We discovered when Luke was about three years old that he is on the autism spectrum. Later he was diagnosed with ADHD,” confirms Natalie. “Luke, who is now six doesn’t yet grasp that other people don’t see things the way he does. If things don’t go his way, he can get hostile or have a major meltdown.”

The regular visits from our Challenge Community Services case worker, and the support services the school provides have helped enormously. “We agonised over where to send Luke to school but decided on the local public school as they had the best supports. Luke has found a great group of friends and likes hanging out with them in the playground, although there are structured activities if he needs them.” The strong support network the couple has built through the school, Luke’s therapists, family and friends allows Luke gets the right care to help him thrive.

Now that the adoption has been finalised, Natalie and Grant are Luke’s legal parents. Natalie and Grant also now have two biological sons.  “Luke has grown up with our other two sons and especially depends on Jaydon* who is the middle sibling of the three. We do hope Luke will continue to have a connection with his birth family. Luke’s mother knows we love Luke and we know she loves him too,” says Natalie. “I still can’t believe after 5 years of hope and crushing disappointment that I have a noisy, chaotic house full of boys. I would not trade it for anything!”

Are you ready to turn a child or young person’s life around? To find out more please phone 1800 084 954 or email fostercare@challengecommunity.org.au.

*Models used in photograph and names changed to protect privacy. 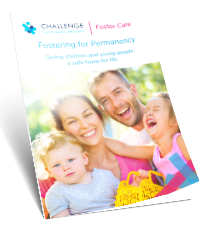 Keep in the loop with jobs, events, industry insights and more!

In the spirit of Reconciliation, Challenge Community Services acknowledges Aboriginal and Torres Strait Islander peoples as the Traditional Owners and Custodians of this country, and their connection to land, water and community. We pay our respect to them, their cultures and customs, and to Elders both past and present.