Twelve months of planning came into fruition as disability services from Trangie, Narromine, Parkes, Dubbo and Orange came together for an all-inclusive day of rugby league.

Players lined up alongside their support workers and family members on the field, and all produced some eye-catching play.

As well as the matches, there were tents around the grounds offering an array of services.

Development Officer of the Far West Academy of Sport Mel Gleeson said they were "overwhelmed" by the response, and was impressed with seven teams taking part in the day.

"We've been totally overwhelmed by the response we've received," she said.

"Everyone that's participating today has such a passion for rugby league and with the circumstances they can't play in regular competitions, that's why we see the need to be able to provide this kind of opportunity to make it inclusive for them to make them apart of the sport."

Ms Gleeson said it's been a collaborative community effort to get the day off the ground, and has helped break down barriers within the community.

"None of it would happen without the service providers getting behind it and supporting it and providing staff to come to the day," she said.

"We've got the local school involved as well, and they've been quite an integral part of the day.

"Early on we spoke to them about what our vision was to host the day and they came on board, so we've got students that have done the draw, they've done team rosters, score sheets, they've done a lot behind the scenes in terms of logistics and have been amazing.

"So far with the three clients Kenny, Karina and Dave, and the supervisor from Challenge Bec, it's been an amazing team effort."

Not only did members of the community from the school to those in the retirement village come to cheer on the game, families and friends organised the canteen to raise money for Challenge Community Services.

"Challenge is only a small organisation in our town, but it is a really integral part of our community, so for them to host such a big event the benefit for them is their family members, and some of the wider community have baked and got a canteen organised and whatever funds they raise they'll put back into their service," Ms Gleeson said.

Organisers hope to make the Trangie Challenge Cup an annual event to provide the opportunity for disability services further west such as Nyngan and Bourke.

"It's all about these members of our community having the opportunity to play the game that they love," Ms Gleeson said. 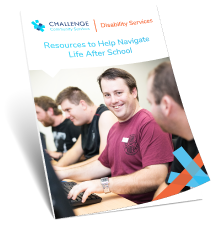